Apocalipstick Hell in a Handbag Series Book One by Lisa Acerbo 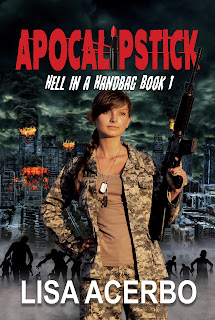 Apocalipstick
Hell in a Handbag Series
Book One
Lisa Acerbo
Genre: Horror, Dystopian,
Romantic Fantasy, NA Romance
Publisher: DLG Publishing Partners
Date of Publication: March 24, 2021
ASIN: B08TQKG3TT
Number of pages: 264
Word Count: 66, 000
Tagline: Life is bad after the apocalypse . . . the undead just made it worse.
Book Description:
“My dreams pre-pandemic included  a high school graduation party before attending college and marrying an attractive future lawyer. Instead, I'm praying for a long, sharp knife and a big gun to survive the undead.” —Jenna
Jenna Martin lives in a world gone insane after a mysterious pandemic kills much of the population. Being alive after an apocalypse is bad, but it is made worse when the multitudes killed by the disease return ravenous for human flesh. Jenna, in serious trouble and pursued by undead, heads to the safest place available, a cemetery.
Ready to give up, she finds the strength to persevere for one more night and meets a group of survivors willing to take her in. The group caravans to Virginia, where they plan to inhabit an isolated inn called High Point, but the undead are always close behind. Packs of zombies, known as Streakers, attack, leaving Jenna and the other survivors battling for their lives and racing toward safety.
Once safely isolated at the inn, the group rebuilds society and Jenna begins a relationship with Caleb. Although he withstood the virus, he has not come out unscathed. He and some others now labeled the New Rave have changed into what many would call zombie kin—vampires. Jenna's falls hard and fast for Caleb, which causes more problems that she ever expected in the fledgling society. But there are worse things than vampires and zombies searching for her, and they arrive at the inn's door ready for destruction.
Amazon

Glass shattered in the next room and footsteps crunched over the broken splinters. What had once been a tall, middle-aged man in a business suit, was now a bloated corpse in rags crusted over with blood and pus. The baked-by-the-sun Streaker wore a wrinkled face with the consistency of an old raisin. His right arm hung limply, dislodged from the socket, but both hands made continual grabbing motions.

Lacking any grace, the creature staggered to the bedroom door and stopped. It sniffed, searching out its next meal. Blood poured from Jenna’s lip, where Tundra had hit her. She wiped it away, then retrieving the piece of wood. Sensing the movement, the Streaker turned its undead eyes on her. Some of its skull had been torn away, exposing the rot. It lumbered and stumbled over the chair in its path, giving Jenna desperate seconds to ready herself. Arm raised, eyes dead and unblinking, it came, dancing with death. It reached out to grab her.

Jenna ducked, then swung low and hard. “I must have gone brain dead. I can’t think of one good zombie joke right now.”

The creature staggered back, but then surged forward. Jenna rammed the edge of the board into its stomach.

“No comeback from the undead. There’s a no brainer.”

It writhed against the constant pressure of the wood. A trail of intestines spurted out, staining the tattered remains of clothing. Jenna gagged at the stench.

“You, my good sir, are too gross for words.”

The undead groaned, plowing forward. Decaying brains leaking from its nostrils and eyes.

“That all you got for me?” She stepped back, hoisting the board, and swung. The head of the creature flew sideways, but it continued forward, emaciated fingers scratching. She drove the Streaker over to the left with a repeated, steady swing. The wood sank into a shallow layer of skin covering the undead’s overripe, bloated belly.

Upon Caleb’s return, he moved to Jenna’s side. She stepped back and leaned against the window. Caleb, hatchet in hand, forced the Streaker into a corner. A noise at the window had her spinning around. A hand shot through the glass and into the room to claw at Jenna’s face. Outside in the darkness, lifeless eyes found her. The undead rammed against the window, spraying glass. Jenna stepped away, and seconds later, a loud crack caused splintered wood and glass to fall to the floor along with pieces of the zombie’s fingers. With a catatonic stare, the Streaker pushed through the opening, tearing its flesh against the jagged edges of the frame.

Jenna flashed back to the cigarettes and matches she saw in the room. Fire was exactly what she needed now. She searched for the matchbook that had laid on the floor, but the room was in disarray thanks to the fight. Something bumped behind her, and panic rose inside her. Dropping to her belly, scanning the floor, her fingers reached under the bed.

About the Author:
Lisa Acerbo is a high school teacher and adjunct faculty at a local community college. She lives in Connecticut with her husband, daughters, two dogs, and horse. When not writing, she mountain bikes, hikes, and fosters dogs.
Website: https://lisaacerbo.com/
Twitter: https://twitter.com/apocalipstick_
Facebook: https://www.facebook.com/lisa.acerbo.5
Instagram: https://www.instagram.com/laft100/ 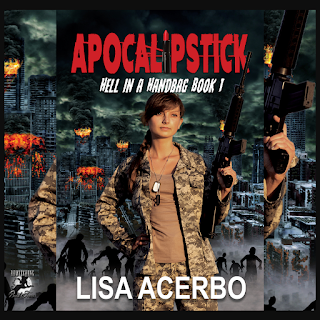