A Thousand Words by M. A. Fréchette 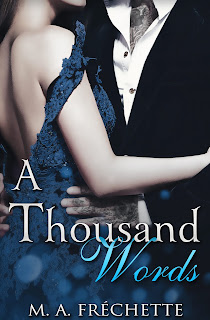 A Thousand Words
Unbroken
Book One
M. A. Fréchette
Genre: Dark contemporary romance
Publisher: M. A. Fréchette
Date of Publication: January 29, 2021
ISBN: 9781777069827
ASIN: B08RMRNFHP
Number of pages: 374
Word Count: 99,856
Cover Artist: Magali Fréchette
Tagline: She’s trapped in a nightmare. Unleashing his own could set her free.
Book Description:
From the outside, Elora Reverie’s life is a dream. A handsome husband; a passion for writing children’s books; a beautiful home. In reality, she’s living a nightmare of abuse in a house that’s little more than a prison.
On a rare escape to a book convention, she’s shocked to win a raffle for a photoshoot with Vincent Voden, a stunning male model. Yielding to the temporary fantasy is an exercise in madness, especially with his phone number hidden in the lining of her purse. But when her husband turns violent, she’s forced to admit her marriage is truly a sham—and she dials that lifeline to Vincent’s safe, strong arms.
Vincent instantly recognized the hopeless look in Elora’s eyes. His mother wore it, too. That’s why he secretly entered Elora’s name into that contest—to shield her, however briefly, in his arms. Now he’s got a second chance to show her love doesn’t have to hurt. When a murderous crime organization re-emerges and targets abused women, Vincent will do whatever it takes to protect Elora from more than just her husband.
No matter what favors from his violent past he needs to call in to make it happen…

Thunder rumbled in the sky, and Elora rubbed her arms at the sound. At least most of the wall was closed off already since the workers were busy focusing on the outside construction.

She slowed as she approached the dining room, her pulse throbbing in her ears. Vincent stood at the window, staring at a familiar paper. She’d doodled on it a few hours ago.

He glanced over his shoulder and gave her a charming smile that sent her heart fluttering. “Sorry. I didn’t mean to poke my nose in here.” He put the sheet on the table and leaned against the chair. “Did you draw this?”

Heat crept into her cheeks that had nothing to do with the temperature. “Where are the other workers?”

“They left early because of the storm. I told Larry I’d let you know, but when I came inside, I found this, and got distracted.” He pointed at the paper. “So did you?”

“Did I what?” she asked, adding an innocent tone to her voice. It sounded… flirty.

He chuckled, taking a step toward her. “Did you draw this?” He grabbed the pad and stopped in front of her.

His scent wrapped around her senses―sweat and the heat of sunlight―and a sudden flush of warmth spread through her. “I was… doodling.”

“It’s great. Are you an interior designer on top of a picture book artist?”

She couldn’t help the burst of laughter escaping her mouth as she shook her head. “No, no. I just enjoy drawing.”

He glanced at the sketch of the sunroom. “Would it be okay if I showed this to Larry? He’d love to use some of these concepts.”

“Richard wouldn’t want me getting involved―”

“I won’t tell him it’s yours.” He took another step closer, and she caught the hem of her shirt, stopping herself from backing away. “If you don’t mind losing the credit for your brilliant ideas?”

She grabbed the drawing from him and frowned at it. “You really think it’s good?”

“I do. You’ve got hidden talents, apparently.” His voice turned husky, and she swallowed hard as she stared at him. “I bet you’re full of surprises, darling.”

Heat engulfed her body at the pet name, and she drew a shuddering breath at the way he stared at her. Not just in interest and lust, but something deeper.

She cleared her throat, putting the paper on the table. “So, are you good at everything?” When his smile turned lewd, she couldn’t help grin. “I didn’t mean it that way. I meant… you’re a construction worker and you model? That’s quite the different professions.”

“And it’s not the only two, either.” He pulled a chair and sat, then motioned for her to do the same. Once she took a seat, he leaned his elbow on the table. “They’re not so distinct, when you think about it. I mean, I need to stay in shape… This incredible body doesn’t happen overnight.”

She giggled. Great. She sounded like a fourteen-year-old infatuated teen. With a loud sniff, she tried to get rid of her embarrassment, but it turned into a snort, and they both burst into a fit of laughter.

When was the last time I laughed like this?

“Have you modeled a while?”

“A few years. I worked construction on a building in the city when an agent approached me. Thought she was kidding when she offered me a contract, but it turned out legit, so I accepted.” He ran his fingers through his dark brown hair. “I don’t take on contracts often since it’s just a side job for me. I’ll usually only say yes if it’s for a charity event or something like that. The Book Fair donated the contest ticket price to an animal shelter, and I just couldn’t resist helping out.”

As she stared into Vincent’s brown eyes, the twinkle behind them seemed to hide a darker side. But it wasn’t threatening; instead, it cradled her.

I’ll have to thank Liana later for putting my name in the contest.

She smiled. “So construction is your primary job?”

“No. I take these jobs when a foreman needs an extra man, and since it’s quiet at my workplace…” he shrugged. “What about you?”

She didn’t mention the sudden shift in his voice; like he wanted to avoid talking about his primary job. Still, she wasn’t one to push considering she wouldn’t give him much information either.

“Just the children’s books, but it’s slow. I have several tasks to do each day, but whenever I get a few minutes, I love to put books together. Stories that’ll inspire children not to suffer alone, feel loved even if they may not have someone in their lives.” She traced a small dent on the wooden table. “But I also enjoy drawing for fun,” she said, glancing toward the paper.

Ever since she had imagined a greenhouse attached to the living room, design ideas had filled her imagination.

A flash of light ripped through the sky, followed by a crash of thunder, and she bolted to her feet. Her breath came faster, memories of Richard throwing objects against the walls resonating in her head. The first time she’d showed fear during a storm, he purposely jump-scared her at every opportunity.

Vincent stood and took her hand, squeezing lightly. She froze, his touch so gentle, yet firm, letting her know he had her.

“Elora?” He tried pulling her closer, but she winced, her shoulder still tender. “Can I see?”

She’d kept the sweater on, covering the nasty bruise that had turned a shade of green, purple, and blue. Unable to speak as he held onto her hand, she nodded slowly. He pulled the clothes to the side, his eyes narrowing on the wound, but he said nothing as he pushed her clothes in place.

“It’s sore, but nothing too horrible.” She tried pulling away, but he took a step closer, closing the gap between them. “I’ll have to be more careful with the boxes next time.”

Before she could reply, thunder echoed, feeling like it shook the house from the ground up. She yelped, instinct pushing her toward Vincent as he wrapped his arms around her. He held her, and they both stood unmoving. As though even the smallest of breaths would break the moment. The safety she felt with him was… indescribable.

Guilt churned her stomach as she thought of Richard. This was unacceptable. She couldn’t feel these things for another man. She was married, and through better or worse, she loved her husband.

She pulled away, averting her gaze. “Sorry. Loud noises make me jumpy.”

He chuckled, cutting through the heaviness in the air between them. “These big powerful arms are here whenever you need them.”

“I should go. I won’t be working here tomorrow, but I’ll be back next week.” He walked to the entrance and opened the door. “Have a good evening.”

She hated that not seeing him for a while hurt this much. 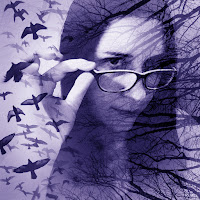 M. A. Fréchette writes the darker side of romance.

Being an extremist, she loves both the dark aspects of life and everything sweet. All her stories are either set in Canada where she lives or in alternate worlds she made up while living within her imagination. When not writing, she thinks of the next scene or plot while enjoying her work as a cover designer. Although she has a fascination for monsters, with a bachelor degree in criminology, she understands there’s no need to create the paranormal; humans are capable of inflicting nightmares of their own. 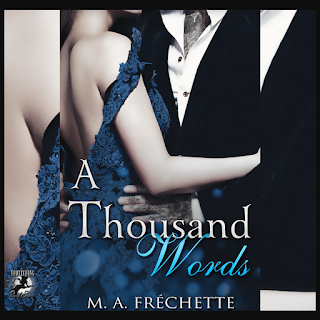